The launch of IVECO’s new Stralis X-Way has brought bulk excavation and muck shift specialist Penfold Verrall one step closer to running an all IVECO fleet, after the Sussex-based company bought four 32-tonners.

The new arrivals replace 8x4s from a competitor marque and increase IVECO’s share of the 30-strong multi-wheeler fleet to more than 90 per cent for the first time. Supplied by Northern Commercials in Hildenborough, they will operate alongside predominately Trakker tippers and tipper grabs in the company’s distinctive blue and yellow livery.

Darren Lynch, Managing Director at Penfold Verrall, says: “We’ve been running Trakkers for more than a decade and really value their suitability for off-road work and getting into landfill sites. The launch of the Stralis X-Way captured our interest as it combines the robustness of IVECO’s toughest model with the fuel efficiency, safety technologies and payload potential of its on-road trucks.”

Penfold Verrall’s order follows the successful week-long trial of a Stralis X-Way demonstrator, which allowed the customer to test the suitability of the new model in a number of applications.

Commenting on his experience with IVECO, Lynch adds: “Previously, we used to keep our trucks for three to four years, but the IVECOs have always proven so reliable we’ve tended to keep them for up to six years. Aftersales care from Northern Commercials has been second-to-none; we have never experienced this level of support from another manufacturer’s dealer.”

Each Stralis X-Way (AD340X420Z) has been built to IVECO’s ‘OFF’ chassis specification – one of three options available alongside ‘ON’ and ‘ON+’ – which ensures the vehicles are suitable for off-road missions. This setup combines excellent ground clearance with the ability to tackle steeper approach angles, making them ideal for the company’s house building and construction-orientated work.

From the outset, IVECO has designed the Stralis X-Way to carry the biggest payload in the sector. Features such as the pneumatic suspension, aluminium rims, plus aluminium air and fuel tanks further reduce kerb weight which means a greater payload can be carried.

All four new vehicles are mounted with Thompson tipper bodies, with Penfold Verrall specifying the trucks to Fleet Operator Recognition Scheme (FORS) Silver Standard – which include forward-facing cameras and a security tracking system.

Powered by a 11.1-litre Cursor 11 diesel engine delivering 420hp and 2,000 Nm of torque, each Stralis X-Way is expected to clock up approximately 80,000 km a year and will be in operation five days a week.

Formed in 2005 with the merger of two family businesses – Penfold Public Works (Sussex) Ltd and G.W. Verrall & Sons – Penfold Verrall specialises in landfill restoration and recycling. It also uses its tipper and plant fleet to support the requirements of construction sites within the Home Counties. 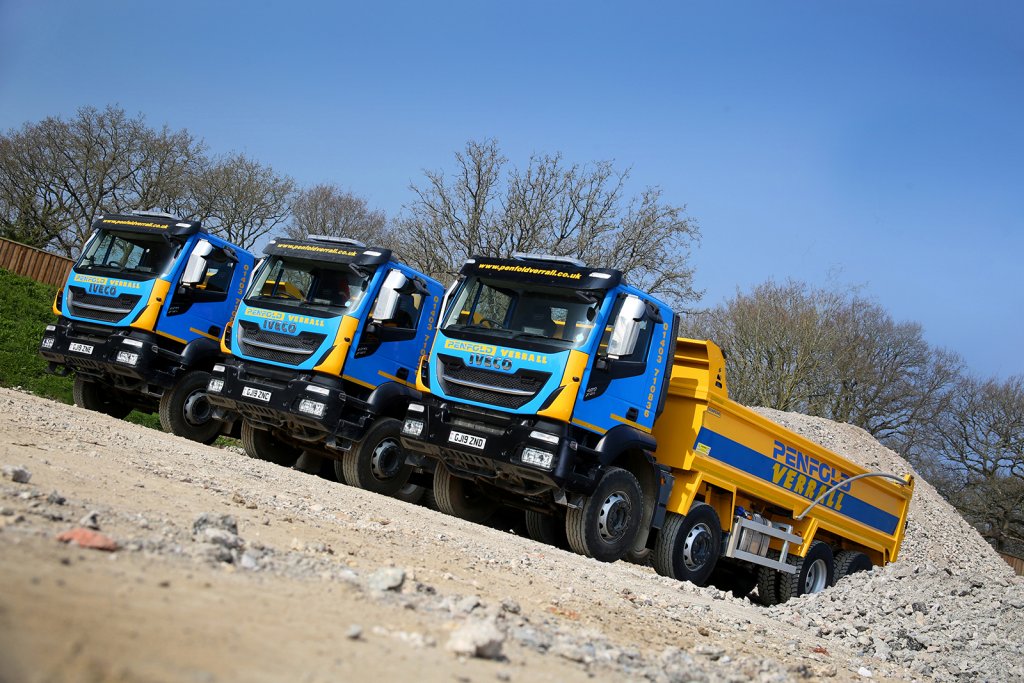 [vc_row][vc_column][vc_column_text]Fox Brothers, the Blackpool-based haulier of aggregates, recycled materials and earthworks contractor, has acquired Clive Hurt Plant Hire Limited in a multi-million-pound deal. The acquisition brings together two of the North West’s premier operators and will
Read More

Family run bulk haulage firm S&J Transport is adopting a 100 per cent BFGoodrich tyre policy across its fleet of rigid and articulated tippers – replacing a practice of fitting budget tyres, which was resulting in frequent tyre damage. The intensive nature of the fleet’s work – each tipper
Read More

JOST UK is to supply Edbro hydraulic systems for 57 new aggregate tipper lorries ordered by CEMEX, one of the foremost companies in the UK building materials supplies market. The vehicles involved are all eight-wheeler rigid trucks rather than tractor-trailer units, with a gross load capacity
Read More